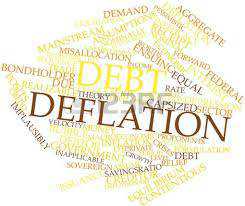 Until September, ECB press conferences featured President Mario Draghi state that, “in the medium-term”, the inflation rate across the Eurozone would rise to be at, or close to two percent.

This attitude is frustrating as data reveals the CPI had not been recorded at two percent since December 2012 and had been under one percent since September 2013.

At every corner Draghi is confronted by the Bündesbank (BUBA) who any hint of monetary indiscipline. Instead buying covered bonds has been proposed and on September 4th the ECB signalled it was ready to start acquiring ABS so as to pump liquidity into the Eurozone economy. Still we ponder what is classified as “real, simple and transparent” and the market is relatively small:

Acquiring European ABS is not a silver bullet to stave off the risk of regional deflation.

Can we act on theory?

The undergraduate is taught deflation is relatively simple to prevent taking hold as the central bank can print money. This assumes we accept the Fisher equation that links nominal and real interest rates.

This assumes the central bank is independent and acting for the good of the economy cf. a government wishing to finance vote worthy spending.

Fears that expanding money supply would release the spectre of inflation are unfounded. Across the world’s leading market economies we still see only moderate price appreciation. Thus we still have not broken free of “lowflation” or “disinflation” implying deflationary risks are proving a serious problem especially in the Eurozone where the ECB and national policymakers are slow to act, implement reform or reflate.

Why is this and what does it imply for future policy?

Comparative statics argues that as aggregate-supply curve (AS) moved to the right then ceteris paribas there would be a resulting decline in the price level. However, this would be negated (with a time lag) by the central bank reducing rates or boosting M to instigate a shift in the aggregate demand (AD) to the right to prevent the deflation?

The Euro floats freely and the ECB could increase M as much as is needed so making deflation easy to prevent. This has not happened as the ECB is a talking shop for the heads of the national central banks (NCB’s) and none has a more powerful voice than BUBA who oppose any expansionary, inflationary proposal.

A lower price level leads to a higher level of M/P, which leads to a lower interest rate, leading to higher investment and hence to greater aggregate spending. Since the relationship runs through M/P, if it is easy to expand M then the AD curve can always be shifted up.

However, has the Eurozone become caught in a liquidity trap in which the money supply is irrelevant at the limit? We are in the realm of the “Zero Interest Rate Policy” (ZIRP). That suggests the causal link is broken. Enhancing M/P does not catalyse any increase in AD to the right. In effect monetary policy is no longer effective in fighting deflation.

Real changes in the real economy:

This is where I sympathise with Draghi. He has called for a serious effort from heads of state to engage in meaningful structural reform. This is not forthcoming from France and Italy, plus Germany refuses to entertain reflation. In my opinion more state spending is not the answer. Governments prove to be poor at getting the best from any unit of expenditure. There is too much scope for fund leakage as favours and concessions are granted in a political not economic interest.

What is needed is a genuine partnership between the ECB and national governments. The ECB should acquire sovereign bonds but only from well behaved and reform minded nations such as Austria, Finland, Germany and the Netherlands. No other, especially not France should have their debt acquired until structural, pro-business reform is introduced. In effect it is time for the central bank to boss the fainéant sovereign nations

Monetary policy at the zero bound may have worked in the US and UK, but it will not work in for the ECB unless the Eurozone members actively encourage business and wealth creation through supply side reforms working in symbiosis with an aggressive monetary policy.

It will take time to move along the J-Curve; however, until the Eurozone can synchronize pan-regional structural reform with unconventional monetary policy, two percent CPI will be nothing more than an illusory dream.