When independence and ideology try to pass in the corridor 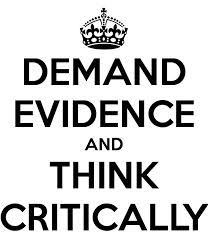 What happens when my independent analysis indicates that your independence creates a sub-optimal state of affairs? Depending on how your research is commissioned, results and recommendations could be suppressed if they fail to match a particular doctrine. This is the next chapter in that story: One side proclaims your results are fundamental truth because they happen to match what that side has been saying and doing all along; the other side attacks on ideological grounds (presuming, of course, that the results are well founded and statistically sound) and finds all kinds of arguments against your research. It might not make sense to you that someone would ignore facts in favour of a position based on dogma; it might even make you cry. Independence and ideology usually try to steer well clear of one another but this is what happens if you put them in a lift together.

Keep your independence out of my business

Since 2010, American States have been adopting the Common Core State Standards Initiative, a federal education initiative that sets out learning goals for students at each grade level throughout the United States. The ‎Initiative arose from concern about the academic achievements of students and represents a rare ‎federal effort to standardise the knowledge and skills students should gain from formal education. ‎However, the anti-federal sentiment in some states ‎has led to a situation where opposition politicians are rejecting the Common Core on the basis that any federal programmes in an infringement on their independence in a populist bid for election. The Common Core standards were developed independently, objectively, based on sound and voluminous research evidence but some people would prefer to ignore them. “Keep your independence out of my family,” they seem to be saying. “I’m free to fail my children my own way if I want to.”

There was a considerable controversy in the early 1990s when the British government began to privatise the railways; some of the arguments were repeated upon the privatisation of the Royal Mail. There were claims and counter-claims about the improvements to customer services, lower prices, higher frequencies, and shinier carriages that would surely follow. Privatisation would shift the concerns of railway operators from the short-term and political to the commercial and independent. That was twenty-odd years ago and a number of research papers in more recent years (Ison, Frost, & Watson, 2010; Jupe, 2009) have questioned whether privatisation has achieved its aims, and indicated that a return to public ownership may be preferable. However, they acknowledge that re-nationalisation is unlikely on political grounds. “Keep your independence out of my free market. I quite like the delays.”

The reports of Inter-Governmental Panel on Climate Change are probably as close to a unanimous position as science has ever come. If it was just about the evidence, the chimneys of the coal-fired power plants would be cold, there would be solar panels on every rooftop, and we’d all be walking to work. However, acceptance of the IPCC recommendations would require market interference by governments, and infringe on the independence of private companies. “But not everyone agrees. I think it’ll be fine.” *Throws another shovel of coal on the fire.

Policy development is always about money, it’s easy enough to follow the money in these three examples. Policy development involves the input of countless holders of stakes, each with a different perspective on the best thing to do. Sadly, the aim of the policy-maker isn’t always to do what analysis shows is best thing but often to serve some other agenda. Policy-making becomes political when considerations like what will be popular in a politician’s constituency, whether geographical or ideological, or what will benefit a company owned by a politician’s friend. There’s a risk that their independence will out-bid yours.

Your recommendations are only as good as the policy-maker who can implement them. No matter how convincing the evidence you present, nothing will change unless and until you can persuade a policy-maker, that is, someone with money to spend, to act on it. Perhaps unsurprisingly, opposition politicians are always on the look-out for good alternative policies with which to criticise the incumbents, and opposition politicians tend to make it into power eventually. Independent research is supposed to treat all ideological imposters just the same but the reverse does not necessarily apply. So when you pass a politician in the corridor, try to smile and say hello.