I am not a role model 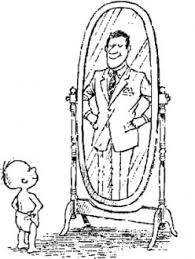 “I am not a role model. I am not paid to be a role model… Just because I dunk a basketball doesn't mean I should raise your kids,” said Charles Barkley in 1993 when advertising a brand of sportswear. Unfortunately, Barkley could do nothing to stop the legion of kiddywinkles who wanted emulate his particular basketball-dunking, moustache-wearing brand of cool. No one chooses to be a role model. It comes with certain positions, such as professional basketball player, whether he likes it or not, and people in those positions can decide to accept that they are a role model and to act with an awareness of the fact, or they can claim to have no responsibility for the people following their example. Your role models don’t choose you – you choose them, and it can tell an interviewer a lot about your values and motivation.

It’s a fairly basic psychological principle that people look around, see who is successful by some measure, and seek to emulate them. The logic goes something like this: That person is successful; if I find out more about what they think and do, and then think and do the same then I might be successful too. The reverse is also true, by the way: Spot something you don’t like and run screaming in the opposite direction. We read the biographies of historical figures, pop-and-roll stars, and sportspeople and marvel at, for example, their hard work, their never-say-die attitude, and how nice they are to their pets. However, authorised biographies are of limited use because people are not very good at recognising the extraneous variables in their success. As with any self-report measure, they risk over-playing their own contribution and under-playing that of other people, genetics, and serendipity.

Roy of the Rovers

The over-simplification inherent in role modelling also means its more common to talk about children having role models than adults, and it’s easier to spot a hero when everything’s black and white. It’s a sad, grey day when you come to realise your role model’s imperfection, but then disappointment is part of growing up. The result doesn’t have to be total disillusionment, though, and it should be possible to dis-aggregate your role model’s attributes. In an interview, this is an opportunity to show off your critical thinking skills and your discerning reaction to a role model’s mistakes, short-comings, or low standards.

At the organisational level, there are two types of role models to consider: other organisations and individuals. A considerable amount of the work of business schools is to describe case studies, examples of companies doing something well analysed down to a series of series of easily-replicable actions for the students to copy. As for individual roles models, beyond the celebrity entrepreneurs, there might be people you’ve worked with who set a good example for you and helped your development. In any company or institution, what those at the top do is the standard for everyone else, and it generally assumed to be the right way to do things. Those people set the tone and define the culture of an organisation. Actually, if you’re one of those people then there’s a good chance you’re a role model already, just like Charles.

The uncredited copywriter who came up with Barkley’s lines was ahead of his or her time. They correctly predicted the rise of the gurus, champions, leads, chiefs, and influencers, especially in business. LinkedIn lets you follow “top industry leaders” (not to be confused with top-industry leaders or, worse, bottom-industry leaders) who (have other people) write blogs dispensing their wisdom and the secrets of their success such as “stay in school” and “work hard”. Beyond the platitudinous, though, it has some value in helping you identify, and then to identify with, the values of the organisation you’re hoping to join or the person conducting the interview.

The final way to use role models is to talk your own leadership. There’s something self-aggrandising about thinking of oneself a role model so you might get further with a story about helping Jeanie next door with her maths homework and her saying how she’d love to be a statistician some day. There are formal role model programmes, like Big Brothers, Big Sisters, whereby young people are paired with adults to act as role models and look out for them. If you’ve been anything from scouts troupe leader to CEO you might well have been a role model, whether you want to be or not.

If the interview question is about who you look up to or admire, the answer is essentially about your values and goals so pick your heroes and describe your reasons carefully. Consider also the possibility that you are a role model, and that might help you talk about leadership and communication skills. Just don’t go too far and start to tell the interviewer how to raise their children.