“So, you’re telling me there’s a chance?” Scepticism and scientific literacy 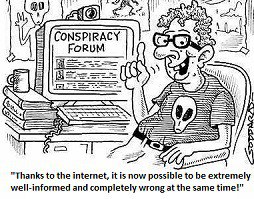 “So, you’re telling me there’s a chance?” said Jim Carrey’s Lloyd Christmas in Dumb and Dumber, delighted at the prospect of one in a million. Lloyd is demonstrating a high degree of statistical and scientific illiteracy. This week, people have been talking about vaccination and whether parents have a right to choose vaccination for their children. The reason everyone is talking about vaccination can be politely referred to as scepticism, that is, doubting whether or not vaccines could be damaging, but it’s really a question of knowing how to make sense of numbers.

Infamously, Wakefield et al. (1998) purported to have evidence of a causal link between the MMR (measles, mumps, and rubella) vaccination and autism. In a sample of 12 children, the vaccine was identified as a possible cause of developmental regression in 8 cases. The Lancet subsequently retracted the article in 2010 but Wakefield had already prompted some parents to decide against vaccinating their children. In general, vaccines have been shown to be safe to use and essential to the control or eradication of diseases and failure to vaccinate children has been noted in the context of rising rates of measles in America and an outbreak in Disneyland in late 2014.

In health sociology ‘herd immunity’ means that a sufficiently high number of people in a population are immune to a disease that it protects everyone. Below that number, the probability of a vulnerable person meeting a carrier and contracting the disease starts to increase. Population coverage of at least 75% for certain diseases and up to 94% for others is required, according to the WHO. Herd immunity was not present in Disneyland, or other clusters of low vaccination in an otherwise almost immune herd.

The story took a dangerous twist recently when opposing sides of political debate in America briefly made MMR vaccination a campaign issue. New Jersey Governor Christ Christie (Rep) and Senator Rand Paul (Rep) suggested that parents should have a choice about vaccination, prompting Hilary Clinton (Dem) among others to become visibly pro-vaccine. It is consistent with a libertarian position that parents should have a choice about vaccination and with a policy of public healthcare provision that people should be vaccinated, but it’s not a political issue. That people could make a decision about a child’s health based on the political party they support rather than public health evidence is just bonkers.

Some of the arguments about the link between vaccination and autism come across as conspiracy theories, with shady characters suppressing data and federal hush-money paid to parents but most people who oppose vaccination, as with plenty of other controversial causes, put forward what they think is strong scientific evidence for their position. However, scrutiny of the details often reveals, at best, mis-interpretation and selective interpretation. What it appears to reveal is a more general mis-construction of scepticism about science.

I doubt, therefore I am

Scepticism is one of the principles of science, and basically involves doubting everything. It’s a neat reminder of the philosophical nature of science and mathematics: the Descartes of the Cartesian plane also gave us ‘dubito ergo sum’ and ‘cogito ergo sum’. Descartes also illustrated how scepticism and logic go hand in hand. Another thing to know about science is the centrality of replicability to the development of scientific knowledge. One study, no matter how perfectly designed, executed, and interpreted, is never enough: We always look for more evidence. The Wakefield study was neither perfect nor replicated. The weight-of-evidence question centres on how much evidence is enough evidence – even pure mathematics is increasingly uncomfortable with ‘proof’ – and there is not enough evidence of the MMR-autism link. There’s another important statistical lesson in the vaccine controversy: Just because two things are changing at the same time doesn’t mean that one caused the other: Correlation is not causation. Finally, the probability of a an unvaccinated individual contracting a disease and the probability of a vaccine having some negative effect need to be assessed logically, and the reward to herd immunity is greater than any risk.

It is healthy to challenge ideas but scepticism without logic is risky. There’s a contrarian spirit in some people that motivates them to do the opposite of what everyone else is doing. They’re sometimes people who know better but more often they’re people who don’t. Striking a balance between removing uncertainty and accepting some reasonable doubt is where scepticism and scientific literacy meet.

Scepticism is like a powerful torch – think the Batman projector thing. Shine it on a subject to benefit from the glorious illumination, but shine it in your own eye and you’ll be blind. Knowing how to direct your scepticism is one aspect of scientific literacy, just like knowing when enough is enough, that it’s a bad idea to look into the wrong end of a torch, and that one in a million isn’t really all that likely.

Assistant Professors in mathematical economics at the Department of Mathematical Sciences

Economic Consultants (at all levels, from recent graduates to experienced professionals).